The 2017 Shropshire Hope Prayer Breakfast was held on Saturday 1 July 2017 at The Lord Hill Hotel, Shrewsbury when our keynote speaker was Rev. Dr. Neil Hudson.
Neil is the Director of the Imagine Project at the London Institute for Contemporary Christianity.  Over the past 10 years this project has investigated what it takes for churches to become communities where whole-life disciples develop and flourish.
Alongside working with LICC, Neil is also an Elim church minister in Salford and has also worked at Regents Theological College, initially as a lecturer and then as Vice-Principal.
Neil’s theme for the morning was “Releasing the Blessing of Whole-Life Discipleship” focusing on how we can become disciples 24/7 every day of the year – wherever we are on our ‘frontlines’ and will unpack principles and ideas to explore ways we can positively impact those around us – every day.
You can now download Neil’s talk together with a PowerPoint presentation of the slides he used. 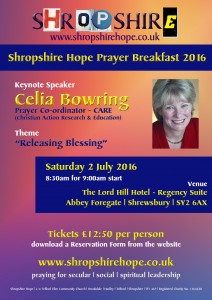 The 2016 Shropshire Hope Prayer Breakfast was held at The Lord Hill Hotel, Shrewsbury on Saturday 2 July with Keynote Speaker Celia Bowring speaking on the theme of ‘Releasing Blessing‘.
Below you will find an audio file of Celia’s talk together with a copy of the 2017 Prayer Booklet which was distributed at the Prayer Breakfast.
In addition we have created links to a number of other updates which were given at the event including a Prayer Guide following the recent EU Referendum decision. 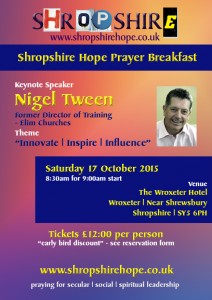 ope Prayer Breakfast 2015
The 2015 Prayer Breakfast was held at The Wroxeter Hotel on Saturday 17 October with our Keynote Speaker Revd Nigel Tween speaking on the theme of ‘Innovate | Inspire | Influence’. 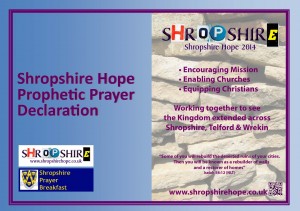 as held at Telford International Centre in conjunction with Shropshire Hope Explosion and Eric Delve was the keynote speaker sharing on ‘The Importance of Prayer’.
A number of the county’s Denominational Leaders spoke out a Prophetic Prayer Declaration over Shropshire, Telford & Wrekin – please download and pray it over your community.

Back to the Shropshire Hope Prayer Breakfast page